Last week I joined with other inventors to stage a peaceful protest against the PTAB by burning our patents. 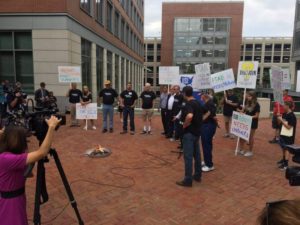 Why were we burning our patents and what is the PTAB?

When Congress passed the America Invents Act (AIA) that took effect in March, 2013 – it was heralded to the media as a great law, featuring long-overdue patent reform. Unfortunately, nothing could be further from the truth. AIA is a terrible law that not only weakens America's historically strong patent protection, but, in many cases, AIA actually invalidates previously-issued patents wreaking havoc on inventors, their families, employees, and their livelihoods. AIA created a new agency, the Patent Trial & Appeal Board (PTAB), residing within the US Patent and Trademark Office (USPTO).

In the AIA, Congress granted the USPTO a broad new authority: to weed out the few patents that were granted, but perhaps should not have been. AIA set up the PTAB, a panel of three judges empowered to review patents brought before it and invalidate some or all of the claims. While the original intent might have been good, PTAB has used its broad powers recklessly, invalidating over 80% of patents brought to them through the appeal system.

Josh Malone is the inventor of a hugely successful product, Bunch-o-Balloons that has sold over $200 million worldwide since launch in 2014. Within months of the launch of his product, Telebrands began selling Balloon Bonanza, a knockoff product (and later another Battle Balloons), carving away millions of dollars in sales from Mr. Malone. Josh committed millions of dollars to file a patent infringement lawsuit against Telebrands and they responded by  countersuing, alleging his patent was invalid. Even though Mr. Malone had clear victories in district courts and later the Court of Appeals for the Federal Circuit, Telebrands petitioned to the PTAB, which granted its request. The PTAB invalidated Mr. Malone's patent, ignoring the substantial precedent set by the previous district and appeals court rulings in Mr. Malone's favor.

A developer of plasma etching technology has been hit with at least 125 PTAB challenges against 7 of its patents. The 7 different patents had been approved by six different examiners within USPTO. Millions of dollars of the owners capital, as well as investors capital was at threat, the PTAB invalidated all 7 of the patents anyways. The PTAB judges said, in effect, that all six different USPTO examiners had erred in issuing the patents, overturning every claim and every patent. Amazing.

Sadly, there are many other similar tales of woe where an inventor spends millions to sue infringers only to have the PTAB rule against the inventor, invalidating most or all of the claims in their patent. Thus, the infringer would get off scot free, newly empowered by the 3-judge panel to sell all they want of a now-invalidated patented product. Can't an inventor appeal a PTAB ruling that invalidates his or her patents? Of course, they can appeal – it would then go before the same board of three judges for the appeal! I am not joking, this is how the process works!

A Beacon of Hope: The Supreme Court

There is a beacon of hope. The U.S. Supreme Court has agreed to hear Oil States Energy v. Greene's Energy Group case number 16-712. In this case, Oil States is petitioning to overturn the PTAB and its three judge panel's authority to invalidate issued patents as unconstitutional. So far, an Amicus, Friend of the Court, brief that includes presidents of 27 inventors groups has been established to support Oil States in this action. We are hopeful that the Supreme Court will overturn and invalidate the PTAB, restoring strength and vigor once again to the US patent system.

Much more information can be found at usinventor.org. Please stay tuned. The future of innovation and invention in America is at stake!